For those that have the energy, and planning ahead for next year, make sure you note that Bass Week will run from 5th to 13th Aug 2023 (as late as it gets!) 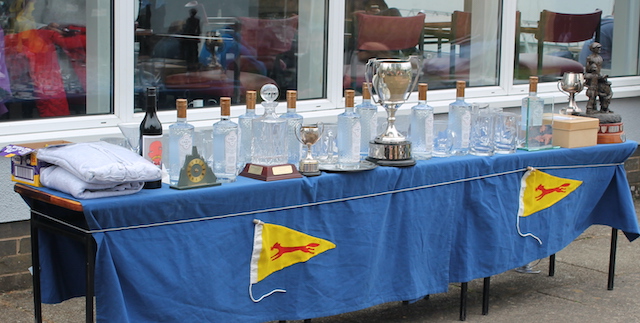 After big celebrations for the final beach party, there was a reduced turnout of just over 50 boats for the final race of the series and bringing the regatta to a close.

Commodore Jon Denwood opened the final prize giving by thanking all that had helped, both front and back of house, to prepare and deliver an excellent event.

After presenting the prizes for the weekend series, there were some special trophies presented to club sailors for their performance over the whole week.

At the end of the prize giving Nigel O’Donnell kindly gave a vote of thanks on behalf of the competitors.

The OD was having kittens as the wind swung back and forth through 45 degrees! Despite being somewhat one sided at times, the beats remained beats.

Numbers on the water increased again for the final weekend with three races today before bringing the regatta to a close tomorrow.

The week’s entertainment will draw to a close with a big Bass beach party.

A chilly but sunny day, with another WNW breeze was similar to Thursday’s conditions thought slightly lighter F2. The forecast showers, fortunately, missed the club.

The afternoon race was for juniors and seniors (how do they find the energy?), but, for a change, it wasn’t particularly wild!

After racing, the third prize giving took place before some competitors left to go home to recuperate.

The high winds of the previous couple of days had passed through, finally! For a change it was from WNW rather than the usual SW which enabled the courses to have a couple of extra long beats.

Again there was some great planing conditions, and numerous capsizes.

The clouds cleared, sun shone, wind freshened, and backed slightly, for the afternoon RNLI pursuit. The Mirrors held their lead until the final beat when Rob and Gemma Burridge in a Laser 2000 broke through to win overall.

Here’s a selection of photos of the week

Another blustery day for the one day, three race, series.

The largest fleet was the Mirror/Topper/Teras, and they pushed forward on the start resulting in a general recall.

There was some good reaches, and spectacular planing. The rescue crews were kept busy with the numerous capsizes.

The base with no strength eased as the afternoon went in, but there were still powerful gusts for more spectacular reaches.

The 2nd prize giving of the week was held after racing, and a restocked fish and chip van was on hand to reenergise many exhausted sailors, before dancing to live music.

A wild and wet night, with rain, and a forecast of strong gusts, seemed to dampen enthusiasm generally. However the rain had passed through when it was time to get ready for racing, and the gusts didn’t match expectations, so about 60 boats took to the water.

There were numerous capsizes before the start as the wind tended to be very gusty, and shifty to boot. There were some good excellent planing conditions to enjoy, but even the leaders were being caught out at times, and went for a swim, however brief!

The Nairn pursuit was held after lunch, with about 40 boats. The blustery conditions continued to take out even the best sailors at gybe marks, on the reaches and even beats!

The Mirrors were one of the first fleets to start and soon took the lead with Graham Vials and Andy Smith having some close battles. With about 10 minutes to go Graham had a good lead but was caught by a gust on a run, turtled his boat, then Andy took the lead.

Too many capsizes by the faster, pursuing, boats was their downfall and they lost too much ground to catch the leaders, so Andy and Katia Smith won overall. 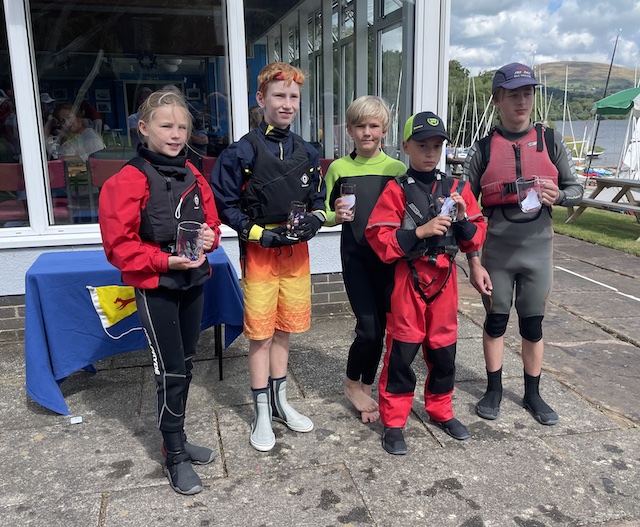 The day started dry and bright with light winds for the morning junior novice’s race.

By the afternoon the wind had freshened, and the OD was convinced there was an opportunity to use the southern end of the lake for racing. However, by the time racing was due to start, conditions were more suited to using the north end of the lake.

The Flying 15s were the first fleet to have a general recall, but were much more cautious 2nd time around! As the wind swung to and fro during the race, Sale Fell may have influenced some strange wind effects, or possibly downdraughts on some legs of the course.

The better wind strength led to good planing conditions, and a few capsizes.

An overcast start was slow to clear, but, as forecast, patches of blue sky started to appear. The wind was a little more reluctant, and racing was postponed until 1330 hrs at the earliest, at which stage a sea breeze seemed to be taking over from the forecast NNW direction, racing was planned for 1415.

Whilst setting the course, the wind filled back in from NNW, the start sequence was underway, only for the sea breeze to return! A postponement was raised, the line moved, and racing was started again. Fortunately, the general SW direction held, and remained for the duration of the race, which was to be the only one of the day.

The prize giving was postponed in favour of the women’s Euro final.

After a bright, mild day, on Friday for campers to set up, some rain moved in overnight, and misle lasted throughout most of the first day’s sailing. The wind was not as gusty as forecast, but there was some good opportunities to plane at times for over 110 boats.

After racing the fish and chip van was kept busy, before the Commodore’s reception, followed by a disco.

Internet problems delayed publication of the results, but they are sorted now!

After months of preparation, everything is in place for CraftInsure Bass Week 2022, and we look forward to welcoming you from 8am on Friday.

With just a week to go, here’s your guide to the week

The regatta will see over 300 racers from up and down the country visit the area for the 9 day regatta. Throughout the week there will be multiple events for all the family, including 9 days of competitive racing, children’s parties, nightly varied entertainment including live music, a quiz night and the all important Commodore’s reception. The club council are hopeful for a restriction free event, further information will be shared nearer the event as the Covid picture becomes clearer. Some of the positives from Bass Week 2021, including the popular coffee stall and visiting food vans, will be returning!

Entries are now open at webcollect.org.uk/bass-sc/category/bass-week Significant discounts on entry fees are available until June 3rd 2022.

Look out for our next promo ‘100 days to Craftinsure Bass Week’ where we will be catching up with some Bass Week regulars to hear their tips for both fast sailing on the water and tactical survival in the bar!