What did you think?

Hope you all enjoyed Bass Week this year. We want your views on the event while it is still fresh in your mind. Please complete the questionnaire and you could win a £25 voucher towards next year’s event (30 July – 7 August 2011) which will be awarded to the 50th and 100th reply.

Good luck and thank you for your time.

Just to say a great big THANK YOU to everyone at your club for making Bass Week such an enjoyable week for us.

You have a fantastic club, with a great team working together to make Bass Week such a success, making everyone very welcome and everyone friendly and helpful.

The facilities were spot on, and I know this was down to the team you have there keeping a check on everything.

The sail training for the kids was excellent, Peter was fantastic with the kids. A special mention to Des for all of his help with the boats.

The atmosphere in the clubhouse is great, with Kayla and Gary, and all of their helpers being superb on the bar. The whole weeks entertainment was fantastic.

A special thanks also to Andrea, who was on top form {roger roger!} all week and is a great asset to your club.

We all made lots of new friends and our first experience of both Bass Week and camping certainly wont be our last. We are looking forward to next year already.

Thanks again and keep up the good work

See you all next year

Charlotte Orton was awarded the Endeavour Trophy as she crewed in her first race when many hardened sailors would not venture out.

A busy day was always on the cards with three races, sponsored by Lloyd Motors, to get through. Although the wind did strengthen in bursts, there were slack spots at times as two different wind directions competed with each other. As ever, this created opportunities for some and problems for others!

It got a little hectic at one stage in the race office as the OD opted to shorten course just as an emergency was radioed in from the lake, and Lucy the caller was brought in an ice cream!. The emergency was due to a N12 sailor dislocating his knee – fortunately, after a trip to hospital, he was back at the club later in the evening.

There was a celebration of 95 years of marriage – ok it was two marriages rather than one (55 and 40 years), but still worth celebrating with a special ceremony by clergyman Carruthers!

The evening entertainment went on into the early hours – amazingly Roystan wasn’t part of it as he had opted for an(other) early night!

A southerly breeze forecast and delivered! Will the strength through the narrows at Scarness be too much to send the fleets to the end of the lake though? As the race start time approached the wind did ease a little and the white horses faded, but not sufficiently to tempt out a full complement of sailors. The faster fleets were sent all the way around the lake and it was the RS800 that completed the course first in just 44 mins. There were various capsizes, and retirements, but those that made it round enjoyed some excellent racing and spinnaker legs to make up for the long slog down the lake.

The afternoon race sponsored by Trident UK was a single start for juniors, ladies and over 60s. The wind had continued to fade considerably from the morning race, which makes a change as all too often it seems to blow like mad for this junior race!

Believe it or not, Bass has Talent, and everyone will be out to demonstrate what form it takes during this evening’s entertainment. There was a wealth of skills and talents demonstrated from singing to playing a pencil, and parading as ladies of the night (well they wouldn’t dare dress like that during the day would they?). Anyway, Bass won that too! Was it a fix, or did they just have more talent for cross dressing?

A bright day with a good W breeze is forecast – will it be right today? For a change it was! However, the gusts introduced some large shifts to challenge the sailors.

This morning’s Martini Challenge trophy was sponsored by Grapevine and the afternoon RNLI pursuit sponsor was Talisker Whisky. The pursuit was experimentally finished using a moving gate – a challenge for the race officer and sailors alike!

During the afternoon Lloyds of Cockermouth sales manager David Byrne visited to present the club with the Volvo Champion Club status award that it secured recently. 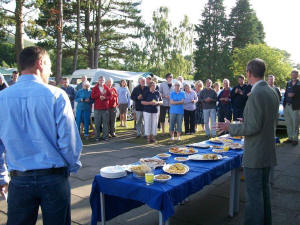 There will be a quiet night watching videos this evening.

A wet night and a damp start, but the forecast was for a good NW breeze throughout the day for the one day Nat West Cup series sponsored by Insurance4Dinghies.

The OD was concerned about the shifting wind conditions and racing was delayed an hour to determine the prevailing direction. Perhaps if the wind had reached its forecast strength there would have been less of an issue. The delay affected the second race and the second prize giving of the week which was threatened by some heavy showers, so the rate of prize distribution increased significantly – it would never happen at the Oscars!!

Although the wind strength never seemed great, various gusts came through that resulted in some capsizes, including our own Robbie D whose crash gybe dumped him and his chances in the race.

The evening went on into the early hours with a disco.

After an evening of live entertainment, sailors are waking to a dry start with the threat of showers, although the wind should pick up nicely as the day goes on. Today’s racing will start with the Dubwath Cup sponsored by Waugh & Musgrave Solicitors followed this afternoon by the Nairn Pursuit sponsored by Saint & Co Accountants.

Some sailors must have caught up on their sleep as they were late for the start of the morning race, and Hollie Telford sailing with dad John, caught up with her sleep during the afternoon pursuit race having slept for the final 40 mins of the race! As forecast, the wind picked up as the day went on. The finish for the pursuit was after a fast spinnaker reach. Paul Allen fell out of the boat yards from the finish but instructed wife Jude to sail on through the line to finish 26th (no mean feat with the gennaker still flying!) while he swam to safety.

The light evening airs made it suitable for the skies to be speckled with numerous Chinese lanterns launched from the jetty and reflecting on the lake.

Beaten by a Bean!

As ever, the quiz night had the club house packed – latecomers had to bring their own seats! The wide ranging questions kept everyone interested right to the end.

As last year, the final outcome was very close with two Bass teams – Gary for Commodore, and www.carruthersandkent.com both with 57 points out of 70 so there was another tie break to guess the number of jelly beans in the prize jar. With answers of 721 and 750, both teams were on a similar wavelength (though Karen Wright did suggest adding 100 to www.carruthersandkent.com‘s answer for good luck). But it was to be Bean’s team (Gary for Commodore) that had the closest to the actual of 1200!

But if Aunty Judith hadn’t over-ruled the obvious answer for the meaning of the morse signal ….. www.carruthersandkent.com would have been clear winners anyway. Is it a case of always the bridesmaid, or will it be third time lucky next year?!

Come down and find out

PS Mention that you found out about the www.carruthersandkent.com website here and Claire will give you a one-off introductory discount

At 9am the rain/drizzle was coming down and the forecast was for a bright day with 7-10mph winds. The likelihood was somewhat ominous!

However, true to its word, the skies cleared, and the winds picked up and there was some excellent racing. The OD again had the problem of a SW wind to contend with, trying to ensure the lap was long enough to accommodate all boats before the final fleet started.

There has been a high turnout over the weekend, with a total of 164 boats competing. The first prize giving of the weekend, was attended by the MD of Tower Mardon, and he presented over 100 prizes to the successful helms and crews.

A gentle, but no doubt highly competitive, quiz is being held this evening.

The evening rain has passed over for the time being, and the wind is forecast to increase in time for the first race, likely sufficient to keep the rescue crews active for the afternoon!

So who can trust forecasts! The wind was slow to build, but the gusts got stronger as the racing progressed. That said, the winds were very patchy, and places could be readily by being in the right place at the right or wrong time! With the wind coming from the SW, the OD had to set a course that used the whole of the northern bay to minimise the risk of the lead boats crossing through the start line before the extended start sequence was complete. Accordingly the course legs crossed in various places, and there were some precarious moments.

As the first weekend series, sponsored by Insurance4Dinghies, is now halfway through, (the latest results can be found using the above link), it is time to relax at the Commodore’s reception followed by a disco.

At 10pm there was a fireworks spectacular which lit up the sky and reflected across the lake. For safety reasons it took place in the grounds of Armathwaite Hall!?

Will there be many bleary eyes tomorrow?

The site is no longer clear – the first visitor arrived at 7.55am – So naughty!!

Many tents, caravans and awnings have been erected, and everyone is getting settled in – They may even get their boats ready too. Shame there are light showers passing through but hey ho, it’s Bass Week and it’s all part of the event!

The handicap splits have been amended as follows:

Zumba is taking the world by storm, apparently, so we have organised for an official Zumba instructor to come to the club to hold two separate 1 hour workshops!!  To cover the costs, we will charge £5 per person, however if there is an excess pot of money after the 2 sessions, we will organise some wine or cocktails after the second event!!  The Zumba sessions will be inside the bar room or outside if the weather permits!!  The more the merrier!!  Bring exercise gear if you are interested in participating.

Afternoon Tea – We would like to invite all visiting and Bass ladies to a “posh bring and eat afternoon tea” (without the tea!) with Pimms cocktails instead!  Please could we ask you to could bring something either savoury or sweet for the buffet table. We will be making a nominal charge of £3 to cover the cocktail costs and would ask you therefore to add your name to a list on the club notice board if interested!  A prize will be awarded to the most original home-made corsage!!  The children could eat our leftovers, if there are any!!

I just wanted to say a big thank you to everyone who was able to come down and help at the Bass Week working party. Your efforts were greatly appreciated and has helped us to get the site ready for this year’s regatta.

There has obviously been a massive amount of work throughout the year building up to this point (especially including the work of the grounds team) and it was brilliant to see efforts culminating with so many getting involved in the working party.

Here’s to a great Bass Week!

Thanks again and best wishes,

As the grounds are looking so good, it’s a shame to let anyone on site to disturb it all…….

Apologies to those not captured on film! (Think yourselves lucky 🙂