Let us know your thoughts on this year’s Bass Week at www.bassenthwaite-sc.org.uk/questionnaire. There’s a £25 voucher for every 25th response.

Yet another fantastic morning, but the forecast is dire sailing wise. Will a sea breeze save the day?

It was a glorious day in the sunshine to be waiting for wind. There were occasional patches of wind that partly took over the mirror-like lake, but nothing substantive until after lunch when a northerly breeze covered the lake. The OD went out, and took the fleets with him, but the wind faded, and came back, and faded yet again, and despite the expectation of a westerly sea breeze it never really materialised. It was over two hours, and several waiter served drinks to the committee boat later, before a breeze was steady enough for the OD to set a course, but racing was eventually underway.

Keen not to lose the Ladies/Junior/60+ race, the OD went out again for an early evening start at around 6.30, being the latest ever Bass Week race, and subsequent prize giving which got underway at 8.15. The prize giving started with an impromptu protest into the validity of Petra and Alison’s authenticity of gender to enter the Ladies’ race. Although the crowd were fully supportive of their entry, the Commodore over-ruled them and disqualified the pair. Petra held her head up, continued to proclaim she was ‘a lady’, and went on to serve behind the bar for a few hours!

After supper, sailors took to the bar and enjoyed some live Elvis music.

Saturday’s forecast is more promising which is just as well because there are three races to get in.

Morning mist followed a cold night for campers. Surely it’ll be another glorious day, but we may have to wait for the wind…

Surprisingly the wind did fill in on time and racing started on time with a reasonable breeze. The wind stayed for the afternoon RNLI pursuit which was such a close call at the finish neither of the two boats on the line could be certain who had won. However, John and Jack Telford had led the full race in their Mirror and won their 2nd pursuit trophy of the week.

The sun stayed out all day, and the very sociable Social Secretary postponed the Olympic games night in favour of going for drinks and nibbles..

Well Wednesday does have 9 letters, but it also happens to be the middle of the week, so will it be a turning point?

Will the wind come in as yesterday, or will it be a waiting game? Only time would tell. The wind swung to the forecast direction by the scheduled start time with a good strength. The afternoon wind strength was backed up by a sea breeze to top off a great days sailing.

Tuesday – Turning Point of the Week?! 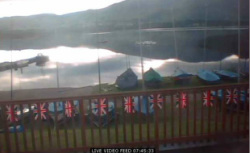 Another calm start to the morning, but the wind is forecast to come in and hopefully the showers will pass us by!

A late night at the disco means there are a few subdued people around at present. Can’t be said of Roystan who claims to have ‘let his hair down’ last night!

The morning race was started in lighter than expected, swinging, airs  which freshened as the race progressed and led to a few capsizes. The wind had steadied by the afternoon for the Nairn pursuit, and John and Jack Telford, sailing a Mirror, were first off the start line and held that lead for the full 90 mins of the race, with the 2nd boat, a GP sailed for the first time by Scumper, a matter of 100m behind.

A lovely evening had many people barbequing and sitting out well after dark.

Tweet us with your gossip to @BassSailingClub and if it’s relevant we will retweet it.

A New Week, Same Old Weather (at the moment!)

Monday started with showers, and little wind, with the expectation that there would be a reasonable breeze to get the sailors around the lake in the only race of the day this afternoon.

Though the showers are likely to continue throughout the day, there is sun on the horizon!

Have you spotted the BatesCam yet? It’s a little temperamental, but hey ho it’s getting there.

Fortunately, the wind filled in and the rain stayed away. As the wind was from the West, the normal Monday course around the lake seemed to OD Toggle that it would be a waste of the first decent breeze of the Regatta, so he opted to take the fleet to Scarness then, bring them back into the main bay. Although he kept having to convince himself that he was right, the issues that sailors experienced getting to, and from, Scarness surely made them appreciate the gusty conditions in the bay which gave them some great planing conditions.

Hopefully, the rain will stay away for the evening and give campers a chance to get their barbeques out again before the disco which will keep everyone entertained until the early hours.

If the forecast is correct, tomorrow’s sailing will be as good as today’s but even brighter and sunnier!

The forecast is for light winds, and that’s what we have. It seems unlikely that there will be any catching up on the race that was lost yesterday as we could be relying on a sea breeze to get racing underway.Inklings of a breeze at the southern end of the lake had the OD inspecting the options of setting a course down there, but with wind coming from the North, it was going to be a long haul to get the boats down there. By the time he returned to the jetty the breeze had started to blow from the South-West! Although it took a while for the fleets to prepare and get to the start line, that wind direction held for the duration of the race, and everyone was ashore to watch Ben Ainslie win gold in the Finn class medal race! Little known fact, but both Ben Ainslie and Ian Percy (or was it Andrew Simpson?) sailed at Bass in 1987, albeit in the Oppie Nationals!

After lunch, the wind had moved back to the South, and the OD had prepared an interesting Vareoesque course, but before racing started the wind faded, swung to the East, and then the North. With the hope of the sea breeze being the saviour of the day disappearing, racing was abandoned.

Saturday – The Countdown is Complete

Although there were rain showers overnight, the day started dry with a gentle breeze, but the forecast suggests that getting racing underway could well be challenging.

The first race got away on time and the wind filled in a little, before changing direction as a sea breeze came in. This resulted in some mark moving to reintroduce a beat, and part of the repositioning meant that the fleets had to do pirouettes around one mark. During the race lightning could be seen to the north, and rain elsewhere, but the Bass micro-climate the club and racing area stayed dry. It was not to last though, when the rain moved in it came with a vengeance, and there was a deluge that flooded tents out (it didn’t do much for cars with their windows left open either!). The OD went out to prepare for another race, but with the lightning continuing, and the wind fading, he opted to go ashore for a while. The wind did look promising when he went out again, but it was not to be. The wind swung, then faded, resulting in racing being abandoned for the day.

At least the competitors have a Commodore’s reception and some live music to look forward to this evening. In the meantime, the Olympics will have a few more viewers. 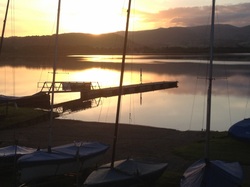 What a glorious view to kick off the week, though it was to be another couple of hours before visitors were itching to get on to site, set up their tents etc., and prepare for the week ahead.

Mr T was one of those first to be spotted with a beverage of the alcoholic variety. Meanwhile others were keeping a close eye on the Olympic sailing, or doing some ‘remote’ working (what better place to do it though!).

Many thanks to everyone who helped out at the working party this evening. It was great to see so many members turning up despite the weather. The club and grounds are looking great in preparation for the week and everything’s coming together for what we hope will be an excellent Bass Week in our diamond jubilee year. Let’s all pray to the sun and wind gods especially hard for the next few days!!