Don’t forget to check out and purchase photo memories from https://www.pdmphoto.co.uk/The-One-Bassenthwaite-Week-2021

I was very impressed by the organisation of the events and helpfulness of all the people we met. The clubhouse and grounds were immaculate and high praise to all the volunteer club members for their hard work.

Everyone said ‘just wait for Bass Week’ and with ominous excitement I did…
Little did I appreciate what was in store – a cocoon of adventure, buzzing with activity, full of friendly faces of all ages; laughs and fun whatever the weather, banging live tunes, delicious food, bountiful games and that’s not to mention the sailing! (How did you competitors find the time for that?!)
A festival of all the best things in life. Exceptionally organised, faultlessly inclusive and mindfully supportive. Thank you all.
Bass is clearly a very special place and I am honoured to be able to join you.
Now, to learn to sail…⛵️

Thank you to all at Bass Club for organising another excellent event. Greatly appreciated after 18 weary eventless months. Well done to all 😃

It was a fantastic week, looking forward to Bass Week 2022.

Sorry we couldn’t do the whole week, but the first half was great.

Bass Week 2021…you were awesome and my new bass family I will grow old with 🥰. Thank you to everyone who organised 🎉

A wet final evening is not unusual, but unfortunate in terms of packing away tents and awnings. At least there should be plenty of wind for the last race of the weekend series, and regatta, for those with the energy and enthusiasm for one final blast!

Even the committee boat ran out of energy just as it was laying the final start line! A reduced turnout competed for series positions before the final prize giving at which Commodore Jon Denwood thanked his team for bringing everything together for a slightly different, fresher, but excellent event.

Thunder and lightning. Flash floods. Well that’s the forecast, fortunately not particularly accurate as yet!

With a SSE F3-4, making use of the full lake was an ideal solution.

For the second race the wind eased slightly so the faster fleets just raced to mark 11. The rain moved in briefly before the final race, killed the wind a bit more, and then started to swing around Sale Fell – quite a change from the first race of the day!

Evening entertainment for those that can muster some energy is the final fling disco, Olympic theme fancy dress of course…

The rain has arrived but ousted the wind. The RNLI pursuit was held in light airs but despite their start advantage, the Mirrors could not maintain their lead, giving way to Adam Billany in an International 2.4 who led through to the finish of the 80 minute race.

After lunch the wind veered to the SW and increased for more great sailing.

One more race for junior and senior sailors, another prize giving, and then some live music to dance the night away.

All good things come to an end, and today could be the day the rain appears, however, due to the Bass microclimate, only time would tell. In the meantime sailors should be able to enjoy F3-4 south easterly – perfect for sailing down the lake perhaps? As it turned out the wind held, and with gusts hitting F6 at times, there was large waves to contend with too. Consequently the turnout was reduced but those that started, in the main, completed the course around the lake.

The wind, or gusts at least, picked up over the lunch break, and when launching for the RNLI pursuit boats were being blown off trollies which put more sailors off, and limited the number that could get launched! As a result the race was abandoned and sailors headed back to shore. As there were several sailors keen to race, a single start handicap race was held. As the rain moved in, the wind eased slightly, much to the disappointment of some.

After racing there was a childrens’ orienteering, and a car treasure hunt, so hopefully the main rain showers held off a while longer.

Another glorious sunny morning to start the day, with the wind forecast to build over throughout the day, we were in for some more fantastic sailing conditions for the three races scheduled, however, there was a slight delay waiting for the wind to settle down – but it was worth it!

The wind eventually filled in from the west, but strengthened with the sea breeze. There were some great planing conditions in the F3-4, and various capsizes. The delayed start resulted in the final race being cancelled.

The second prize giving will be held after racing, and there will be some live music later in the evening.

The day got off to a flying start with two Gold, and one Silver, medals for GBR in the sailing.

The first race scheduled for 11am was delayed waiting for the wind to bed in, and eventually got underway at 12.45. As soon as the sequence started the wind wavered as the initially expected westerly appeared. Fortunately, the wind came back quickly and the race continued.

After a lunch break the Nairn Pursuit was held in strengthening winds. Graham Vials sailing a Mirror with son Sebastian, took advantage of clear airs to take an early lead, which no other boat was able to overcome.

In the evening, after another fish supper, sailors and families will, no doubt, prove that Bass HAS got talent which is open to all comers.

The midweek racing started today with just one afternoon race to give new arrivals an opportunity to travel and set up their boats.

Although often sailed around the lake, the westerly breeze would have ensured frustrations as the downdraughts from Sale Fell came down vertically and spread in all directions!

Sailing in the northern bay proved to be the best option as the wind increased to F2-3 with the help of a sea breeze.

Of course there were shifts, but nothing to what would have been at the southern end of the lake! To top it off the sun broke through for some mediterranean-esque sailing conditions and a cloudless evening.

After racing the pizza van had a regular stream of customers to please kids and sailors alike.

Sunday started drier and brighter with the possibility of a strengthening breeze from the NE.

Although the general direction remained true, the were some major shifts, and lulls, for the fleets to contend with. Starting on time at the favoured port end wasn’t necessarily the best way forward, as one Flying 15 proved, struggling to cross the line due to the wind dropping, it was a minute late, started at the starboard end, took a shift and was first to the windward mark. Many others suffered similar snakes and ladders lottery shifts.

The wish for the wind to bed in, and be steadier, for the afternoon racing was optimistic unfortunately! Again it swung excessively, and was somewhat light at times, though there were occasional planing conditions

The first prize giving of the week is being held today.

This evening the annual quiz night will bring out the competitive instinct one more time. 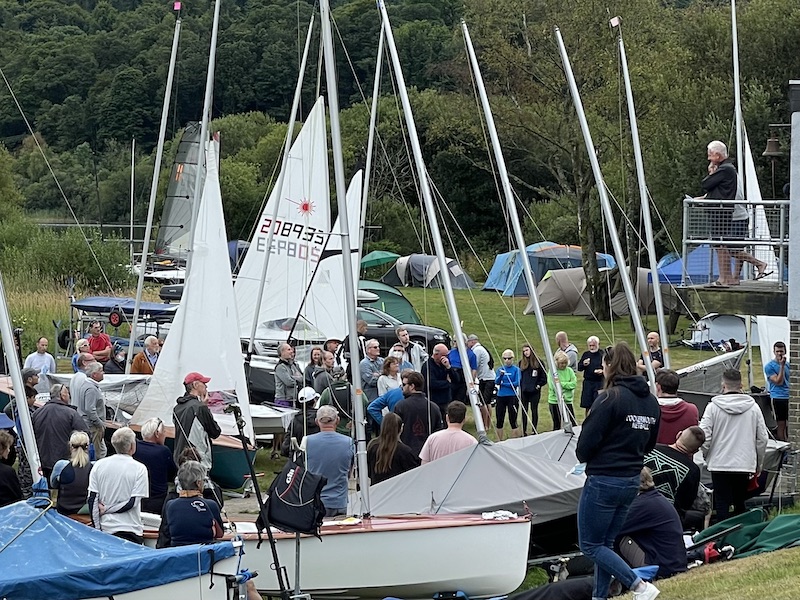 Let the fun begin. Overnight showers have passed through, and will stay away for a while, hopefully! The breeze should pick up to F2-F3 through the day for the two scheduled races, but Bass does benefit from its own microclimate, so anything may happen…

The wind was light at the start, but increased as forecast albeit in fits and starts, and threw in some major shifts to challenge the fleets.

In the first race, there were a few premature starters, and all but one returned. The wind continued to freshen for the second race, and resulted in some planing opportunities occasionally. The Flying 15s caused the first general recall of the regatta, so had to wait for the remaining 8 fleets started before they had their second chance to get away.

After racing the sailors were queuing for their fish suppers at the mobile chippy, before going to meet the commodore at the welcome reception, with some live music to follow.

Below are links for various documents for some light reading before Bass Week starts in just two weeks time!
Notice of Race
Sailing Instructions
Event Programme
Parental and Medical Consent Form – if appropriate, please complete and hand in at reception on arrival

Many thanks for your patience and understanding over recent months with regard to the planning and decisions around hosting Bass Week 2021. As you will all appreciate it has and remains a very difficult and testing time for anyone trying to organise any events.

We are delighted to inform you that we will be hosting Bass Week 2021 this year and we look forward to welcoming you to Bassenthwaite Sailing Club.

However, as many of you would expect the week will have some differences to “normal times” in an effort to keep us all safe and healthy.
We will be providing all entrants with a welcome pack via email before the event which will contain full information about the event, but just to highlight a few of the changes to expect this year…

We hope that everyone will appreciate and respect the changes we have made, which are in the best interests of all those attending.

Entries have now closed and the event is at full capacity for those who wish to stay on site. Further sailing only entries maybe accepted at the discretion of the organisers.

Despite the above we do hope that Bass Week 2021 will be a thoroughly enjoyable and successful event. We are very much looking forward to welcoming old friends back to Bass and greeting new ones within the usual Bass SC friendly atmosphere.

If you have any questions around the week, please contact The Bass Week Team via [email protected]

Planning for Bass Week 2021 has been underway for some months now and we are all ready and good to go. However, as you will all appreciate the viability and scope of Bass Week 2021 depends upon the ‘Covid roadmap out of lockdown’ and any restrictions that maybe in place.

We had hoped to be able to open entries in the coming weeks, but given the recent changes and the possibility that Step 4 of the roadmap maybe delayed beyond June 21st as originally indicated, we have made the decision to delay opening entry until the picture becomes clearer.

Please rest assured that if it is feasible and appropriate for Bassenthwaite SC to host Bass Week 2021, then we will do so.

We thank you all for your patience in, what we hope you will understand, is a very changeable and challenging situation.