While some sailors have gone back to work for a rest after a blustery weekend’s sailing, some new sailors will be turning up for the midweek racing, so it will be a leisurely start with just one race in the afternoon. 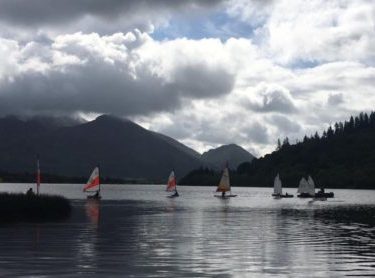 The spare morning was used to offer some sail training to a group of youngsters, and the conditions were suitably light.

The overnight rain had passed through and cleared leaving blue skies. Would the OD opt to send the fleet around the lake as often happens for the Monday race? With a good wind from the SW, it seemed wrong to waste the chance of some great racing in the bay, so that’s where the course was set. With the RS400s back in the fast handicap fleet, their start was a bit busier to the extent that they had a general recall so it was to the back of the queue they went to calm down.

Graham and Alan in the Flying 15 found sticking to the course challenging, and lost ground retracing their steps when they headed for the wrong mark (again)!  Helms, and crews , had to keep their wits about them as fleets crossed on different legs of the course, but they were able to relax with a cooling drink in the sunshine afterwards.

It’s pie night in the galley followed by a magician. Will he be able to conjure up some good winds for Tuesday as the forecast is a bit light…