The final weekend is here. Traditionally the prizes have been whisky, for those old enough to consume it, and this year is no exception as our lead sponsor is The Lakes Distillery.

Three races to squeeze in today. The weather started damp after a wet night and the forecast gusty winds were keeping a low profile.

Some of the younger sailors even found time to rehearse for a show for family and friends. 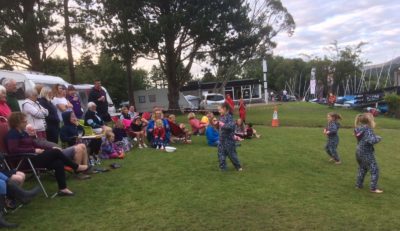 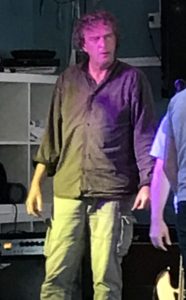 The live band on Friday had proved to be intoxicating in more ways than one, and the rescue crews were having a lie in despite the early 10.30 start which delayed proceedings for a short while.

The winds remained lighter than forecast, and varied in strength occasionally causing a slow final lap for some. By lunchtime the clouds were clearing and the sun finally appeared. Three races were completed with mixed results for some.

The sun continued to shine for the caterers barbecue before the final evening’s entertainment which was headlined by The Exploding Buddhas by special request of Zena Martin to celebrate her wedding anniversary. Some wondered whether the bass guitarist was a cross between James May and Jeremy Clarkson!

Any late evening revellers should hope for clear skies for a chance to see a meteor shower about 11pm as we’re in an excellent location avoiding light pollution.