A dry start to the day with the forecast of a better breeze to hopefully get in an extra race having lost one yesterday.

With a good southerly, the conditions were ideal for a 10.30 start to get the day’s racing underway, with some great planing, and the occasional capsize! The Laser fleet caused the first general recall of the week. Hopefully putting them to the back of the start sequence will stop them being quite so eager in the future.

Two races sailed with the final one after lunch. Would the rain showers miss us? Just before the final race the wind swung to the west, and the committee boat set a course accordingly, only for it to veer to the north while waiting for the fleets to get to the line. The wind appeared to be returning to the west so the sequence was started in anticipation, but abandoned with seconds to spare. A while later the southerly wind was spotted, the start relaid and racing was soon underway. The direction remained true, but the strength eased unfortunately.

The first prize giving of the week was held just as a light rain shower was imminent. The sponsors umbrellas which were awarded as prizes for some winners proved quite useful! 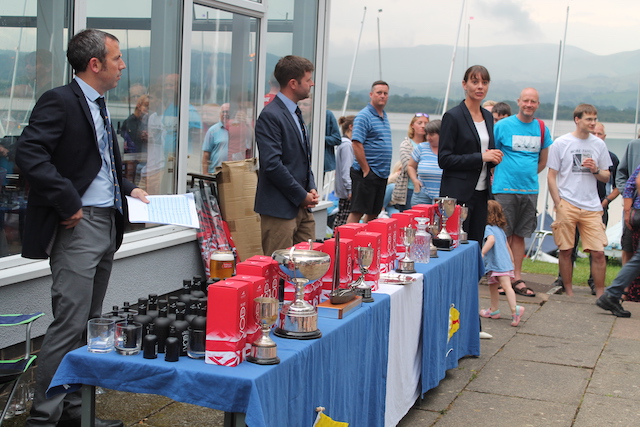