A loud and busy night of entertain 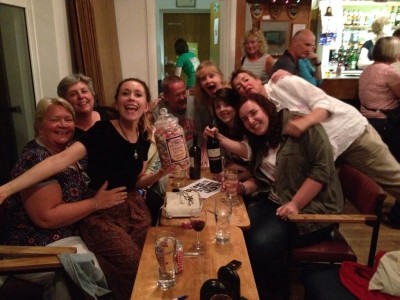 ment may leave many blowing the cobwebs away with a great sail. Conditions started off showery, but the wind held, and there were again squalls to challenge sailors expertise as well as enhance their enjoyment.

Sunshine reigned, as did the good sailing conditions.

The Medium Handicap were the first fleet to cause a general recall, and some general confusion as the sailors were uncertain about the restart procedure. Also, it meant that the faster fleets were completing their first lap and passing across the starting area before all starts had been completed!

The first prize giving of the week was held outside, and fortunately the threatening weather held off.

As ever, the quiz night generated a lot of interest. When the winning team was announced, three groups cheered (Kevin’s Ely group were just chancing their luck!). It turned out that two teams had picked the same name – Norfolk and Chance! Although both had done well, it was the Bass Carruthers/Denwood group that won the jar of sweets.